For a dealer or collector of Japanese woodblock prints, a question that arises from time to time is what to do with parts of multi-sheet prints. The temptation is to hold them in hopes of acquiring the sheet or sheets that will complete the image. As a practical matter, this is generally not worth doing unless the single print is from a fairly important or valuable image. It can take years, and in fact may never happen. Even if other sheets are located, their impression or condition may be so different as to not make an acceptable whole. 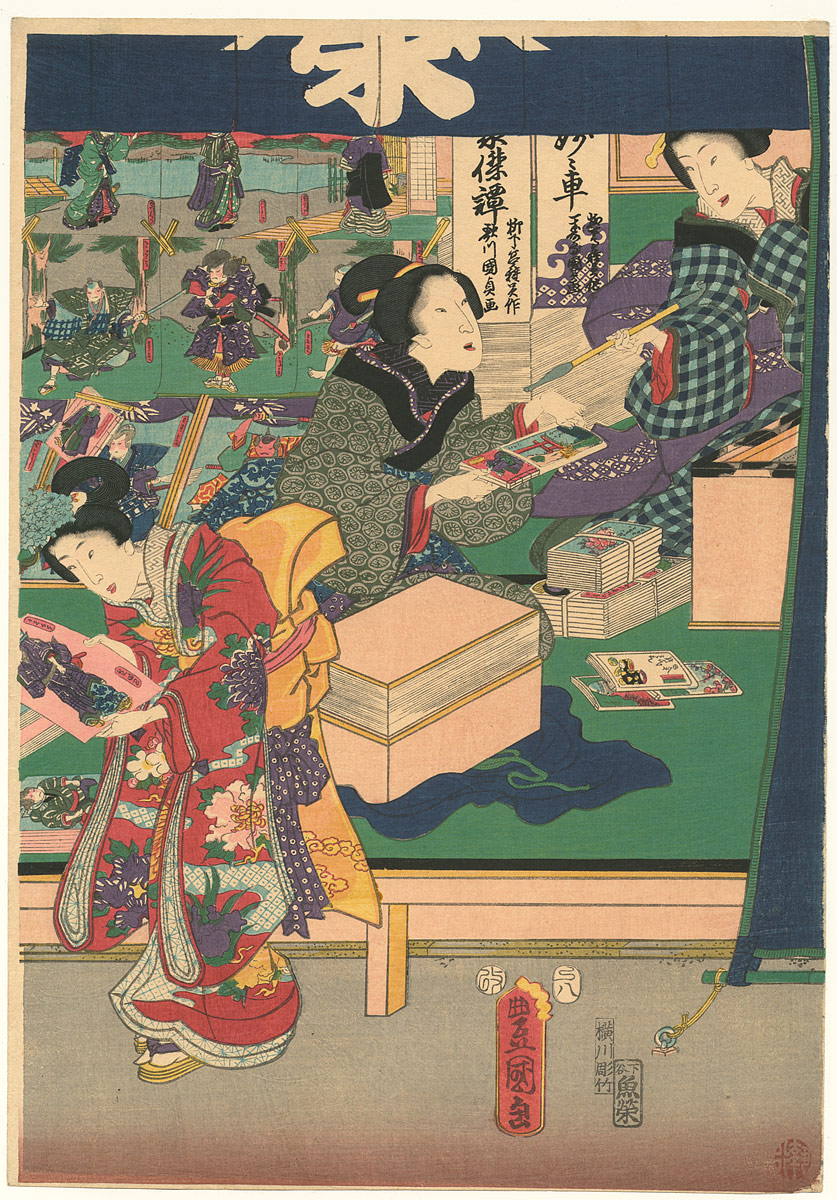 I acquired this center sheet in 2005 as part of a private collection. Recognizing its importance, I immediately put it aside not just in the hope of acquiring the other sheets, but because even by itself it is of great interest. It is the center sheet of the Toyokuni III triptych showing “merchants” from the triptych series Imayo Mitate Shi-no-ko-sho - An up to Date Parody of the Four Classes, printed in the eighth month of 1857. It is illustrated in Kunisada’s World, page 179. The image shows women as print sellers and customers. Note the collector’s seal on the bottom right. It is shown in Andon No. 12, Winter 1983, IA.10 and is unidentified. Note also the superb condition; an early impression with quality pigments and sophisticated printing, not trimmed or backed. It is an especially worthy example of this important image.

Moving forward to 2017. I was perusing the offerings of an auction house online and noticed a lot containing a number of prints, of which four were shown, but not shown completely! They were placed on top of each other, alternating height and width, so that the only image completely visible was the one on top. And that was not particularly desirable. I emailed asking for complete images of the prints in the lot. No response. A couple of days before the auction, I had basically decided not to make any further efforts.

Nevertheless, emails have been known to go astray so I emailed again. They responded with decent scans. There was not much of interest until I clicked on the fifth or sixth scan, when, much to my astonishment, up popped the left hand sheet, shown here: 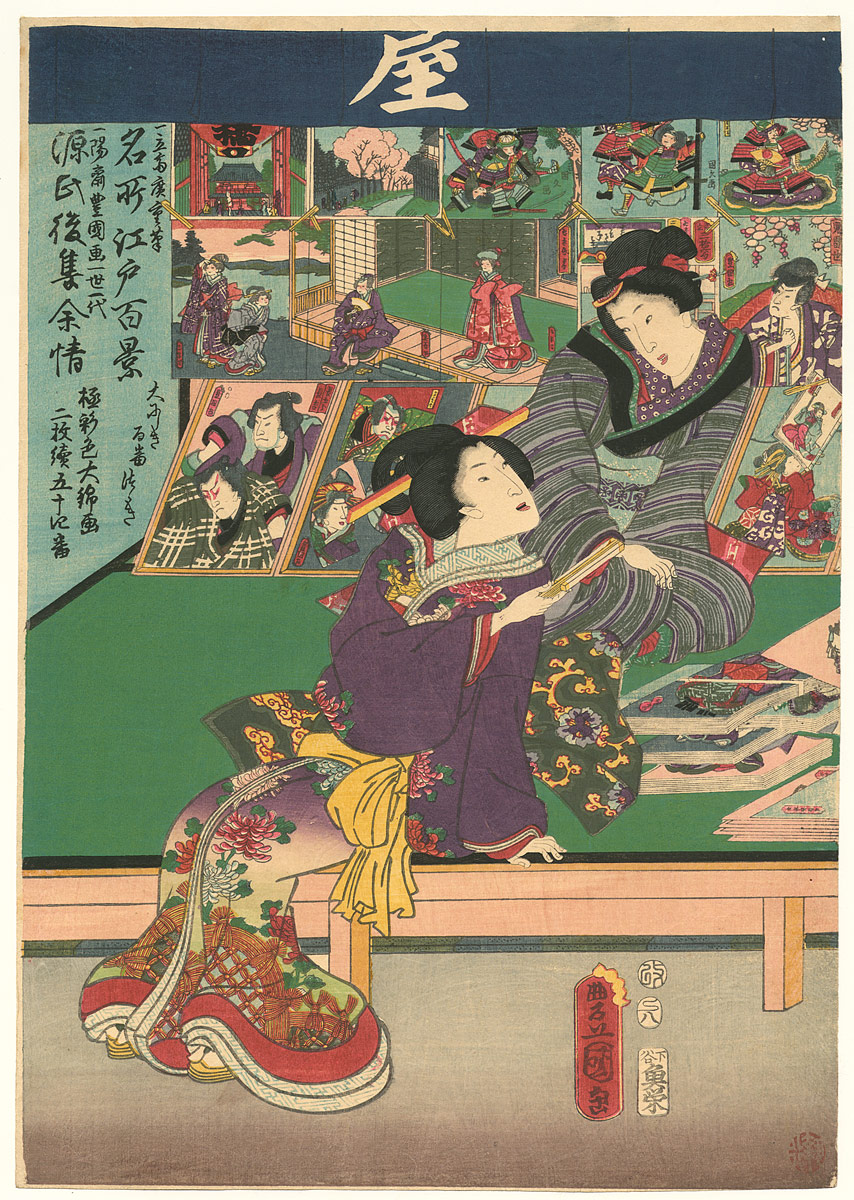 Clearly in excellent condition, untrimmed, with the same collector’s seal in the bottom right. By the way, this is a seal I had never seen before acquiring the center sheet, nor have I seen since. That, along with Matthi Forrer being unable to identify it in the Andon article indicates its rarity. I continued to open the other images, and you, of course, know what is coming next – the right hand sheet – again, super condition, same lack of trimming and same collector’s seal on top of the publisher’s seal! 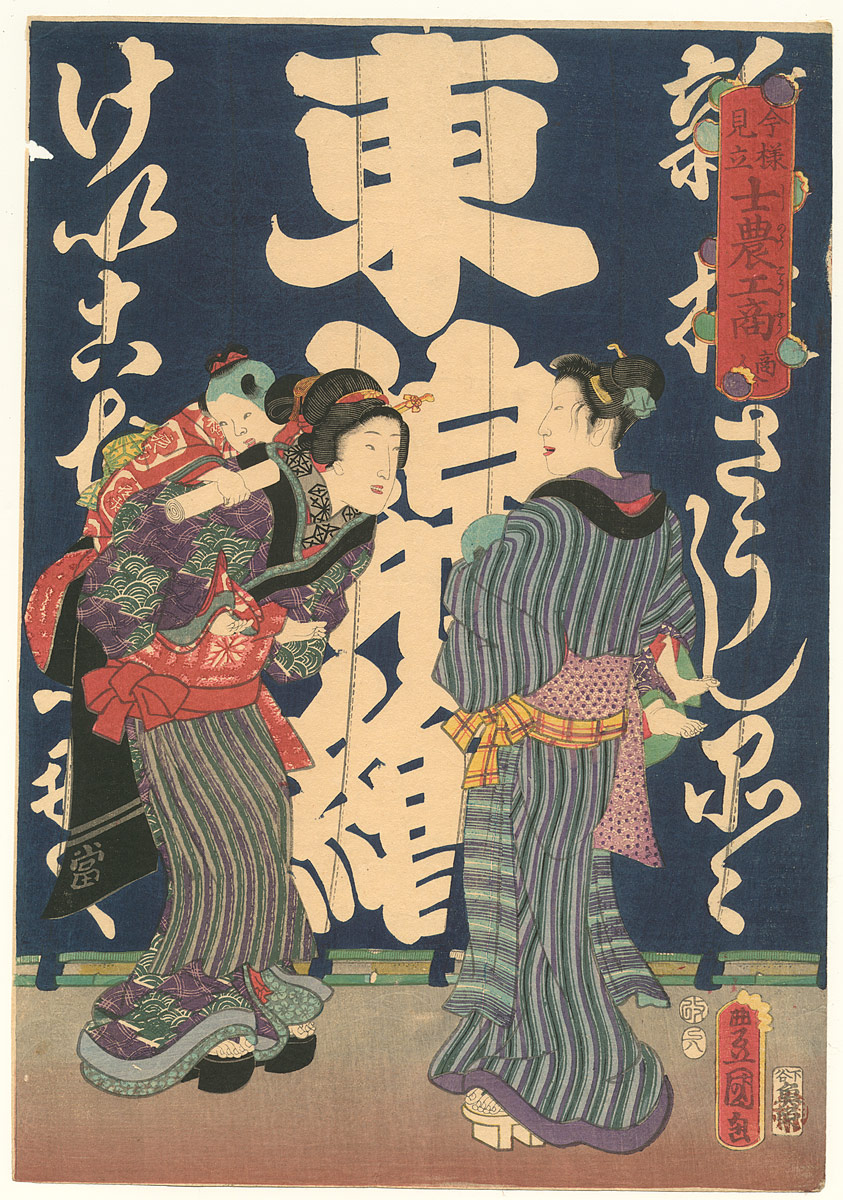 All I had to do was bid enough to acquire the lot, which I did, completing the triptych.

How these became separated and ended up where they did is a question I can’t answer. But what good fortune that I was able to get them back together.

Home | About Us | Reference Books